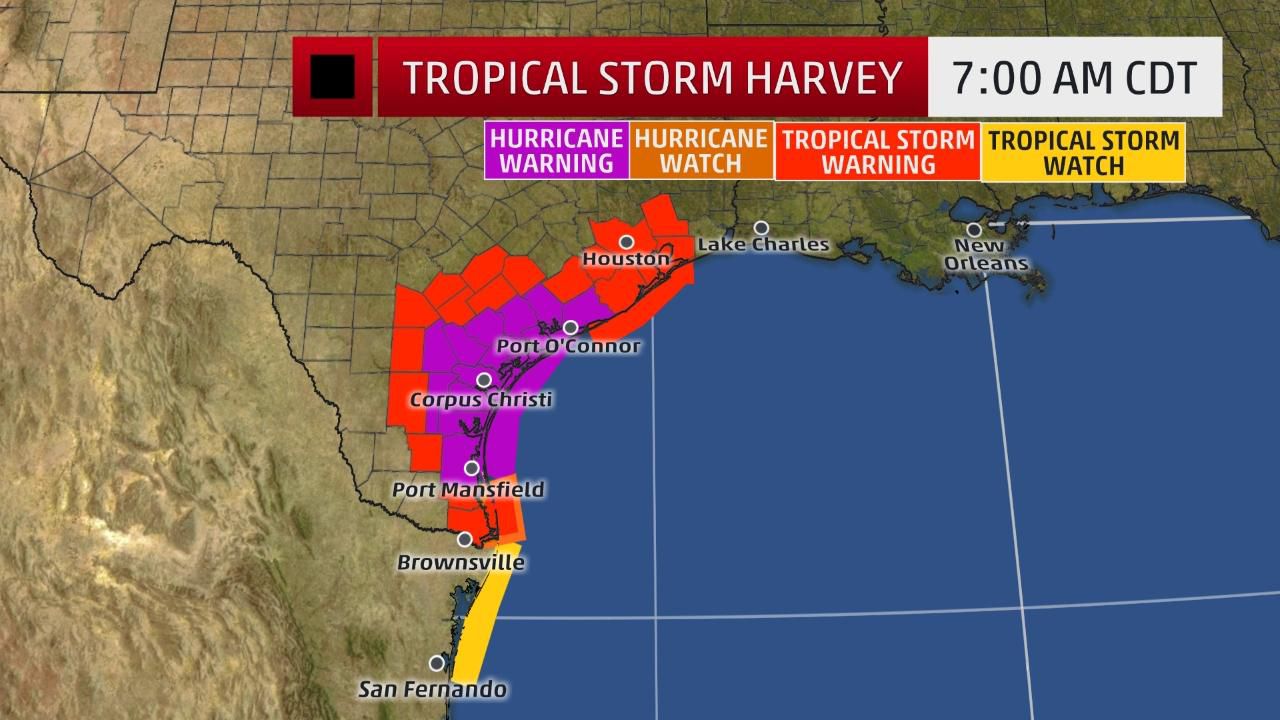 Hurricane and storm surge warnings have been issued as Tropical Storm Harvey is expected to strengthen, potentially rapidly, into a hurricane before bringing an extremely dangerous combination of rainfall and storm-surge flooding to areas near the Texas and Louisiana coasts into the weekend or early next week.

A hurricane warning has been issued for a portion of the Texas coast, from north of Port Mansfield to Matagorda, including the city of Corpus Christi. A hurricane warning means hurricane conditions are likely within the watch area. They are typically issued within 36 hours of the expected onset of hurricane-force winds.

Tropical storm warnings are in effect from north of Matagorda to High Island, Texas, including the cities of Houston and Galveston. This means tropical storm conditions are expected within 36 hours.

The NHC has also issued its first ever public storm surge warning, which includes a swath of the Texas coast from Port Mansfield to San Luis Pass Island. This means a life-threatening storm surge is expected in the warned area in the next 36 hours. This warning does not include Galveston Bay.

The NHC says the center of Harvey is located about 335 miles southeast of Port Mansfield, Texas, and is moving northwest at 10 mph. Maximum sustained winds have now increased to 60 mph.

Thunderstorms have become much more compact near the center of Harvey, with spreading upper-level winds providing a boost for vigorous thunderstorm development.

With a favorable environment that includes deep, warm Gulf of Mexico water, and low wind shear, Harvey will strengthen into a hurricane before its landfall along the Texas coast late Friday night or early Saturday.

There is an increasing chance this intensification could be rapid, featuring at least an increase in maximum sustained winds of 35 mph in a time period of 24 hours or less, so it's not out of the question Harvey could be a Category 2 hurricane at landfall.

It's also possible Harvey's center may re-emerge over the Gulf of Mexico early next week, opening up the possibility of some restrengthening before a final landfall in Louisiana. But that remains highly uncertain, as stalled or slow-moving tropical cyclones are notoriously difficult to forecast.

Harvey will bring a mess of coastal impacts, including storm-surge flooding, high surf with battering waves and strong winds.

Perhaps the most dangerous, widespread impact, however, will be prolific rainfall and potential widespread flooding.

Harvey will be caught in a zone of light steering winds aloft beginning this weekend that will slow or stall the circulation.

A tropical cyclone's rainfall potential is a function of its forward speed, not its intensity.

Therefore, if Harvey stalls for a period of a few days, as expected, it will produce prolific rainfall, capable of dangerous, perhaps catastrophic flash flooding.

To illustrate this, it's possible Harvey's heavy rain may not entirely exit the areas of Texas it soaks until sometime Wednesday, after first arriving late Friday.

Harvey is also expected to produce rainfall accumulations of 3 to 9 inches on the periphery of the aforementioned torrential rain area from parts of central Texas eastward into the lower Mississippi Valley into next week.

This forecast is subject to change depending on the exact path of Harvey, locations of rainbands and how long it stalls. Generally, areas along and east of Harvey's path are in the greatest threat of flooding rainfall.

For now, areas near the Texas and southwest Louisiana Gulf coasts are in the biggest threat for torrential rainfall and major flash flooding, potentially including Houston and Corpus Christi.

Among the biggest uncertainties is the heavy rain potential in central Texas, including for the flood-prone cities of Austin and San Antonio. That all depends on how far inland and to the west Harvey tracks.

The ground is already quite saturated in many of these areas from what has been one of the wettest starts to August on record.

To the east of Harvey's center, a persistent fetch of south to southeast winds will build swells over the western Gulf of Mexico. As Harvey strengthens, coastal flooding could increase along parts of the Texas and Louisiana coasts as soon as late Thursday, then the peak storm surge will arrive late Friday night with Harvey's intensification and landfall.

Locations in the storm surge warning along the Texas coast (Port Mansfield to San Luis Pass) could see a water rise of 5 to 7 feet above ground level along the immediate coast if the peak surge coincides with high tide.

Areas in the storm surge watch, including Galveston Bay, may see water rises of 2 to 4 feet above ground level at high tide.

Given Harvey's expected slow crawl near the coast, at least some coastal flooding, along with battering waves, could persist for several days, over multiple tide cycles along the Texas and southwest Louisiana coast into next week.

This coastal flooding and wave action could increase if Harvey's center re-emerges over the Gulf and intensifies, potentially leading to a second storm surge along the Louisiana coast next week. Again, this part of the forecast is highly uncertain at this time.

This water rise near the coast won't allow rain-swollen rivers and bayous to drain, compounding the inland flood threat.

If that wasn't enough, persistent winds, even if they are not particularly high-end if Harvey is over land, could down more trees than they otherwise would given the rain-soaked or flooded ground.

Now is a good time to make sure you have a plan in case of both a hurricane strike and flooding. The Federal Alliance for Safe Homes can help you plan for a hurricane. NOAA also has excellent resources to plan for flooding.

Check back with weather.com for updates in the days ahead on this latest system and the rest of the hurricane season.