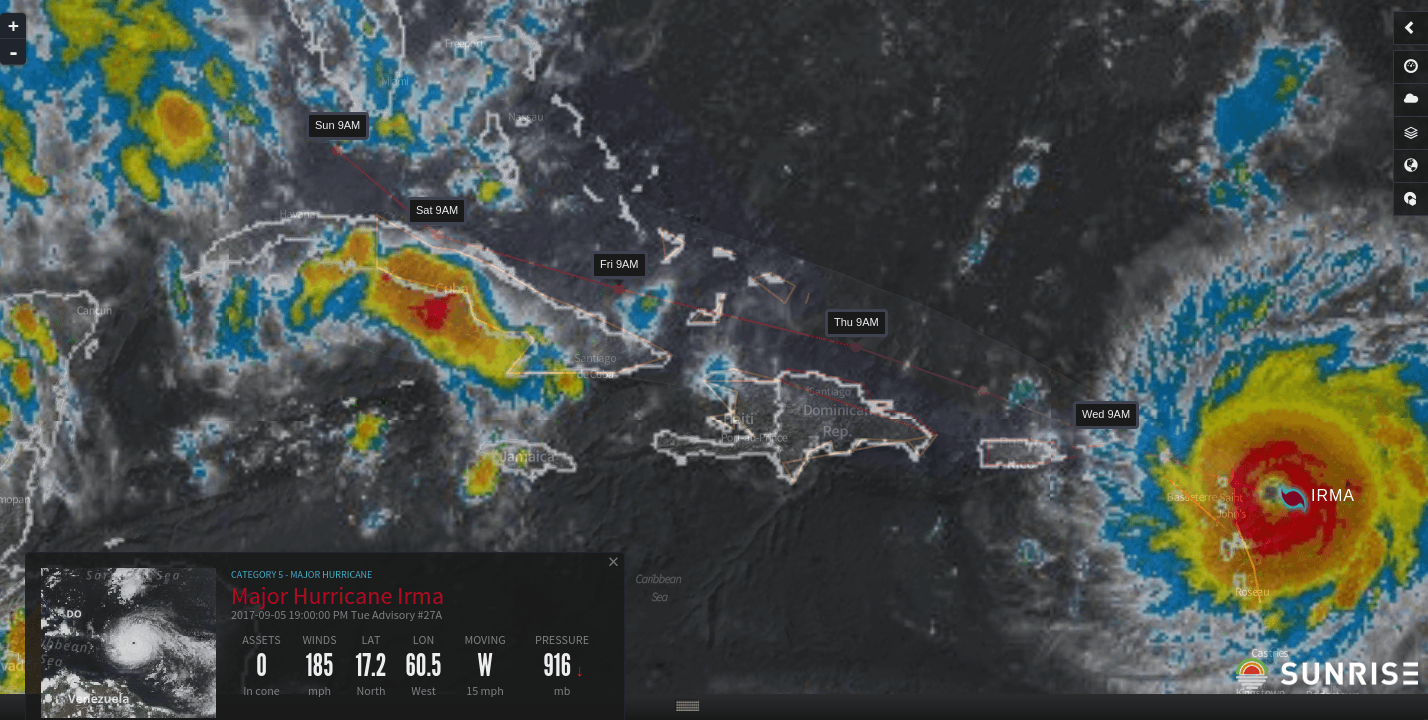 Even after today's model runs, significant differences still exist between the projected tracks of Irma by several of the forecast models that are traditionally most reliable. We'll forgo sharing specific forecast maps, as we don't view any one track as more or less likely than the others at this point, but it is fair to say that the uncertainty associated with the forecast at this stage is above average for a Day 5 forecast. The next 24 hours are critical for communicating any anticipated impacts in the South Florida region, and we can hope that the models are able to come into better agreement in this time in order to facilitate the clearest possible communication of the anticipated impacts.

In the track above, the National Hurricane Center predicts that Irma will be over the Florida Keys by this upcoming Sunday morning (September 10th). It is right around this time, however, where very specific details as to the track of Irma and other large-scale meteorological features play a huge role in determining the exact track of Irma beyond early next Sunday. The presence a cold front (and attendant upper-level trough) over the Mid-Atlantic and Southeast US states will serve to pull Irma northward in a rather sudden fashion, making Irma appear to take a hard and somewhat suddent right turn from its west-northwesterly path to a path that is nearly due north. This turn has been well anticipated, however the timing of both Irma and the cold front/trough to its north remain uncertain.

Like any two objects passing each other moving in opposite directions, determining exactly when the two objects reach the point at which they are closest to each other is the challenge here. The resulting impacts, however, are large. Some models, such as the ECMWF (Euro) and Canadian, track Irma farther south and a bit slower than other models such as the GFS. In turn, the ECMWF and Canadian models have Irma turning north at a location farther west than the GFS does. This difference is only ~50-100 miles at Day 5 - which, in most storms, could be considered good agreement (For comparison, the average NHC track error for a Day 5 forecast is over 200 miles!). Here, the difference is approximately the width of the Florida peninsula, with the western tracks making landfall in southwest Florida, while the eastern tracks are much closer to Miami and follow most of the east coast of Florida.

Further complicating matters, with an intense storm such as Irma, the most dangerous winds are in a compact region close to the storm's center. As a result, small differences in track forecasts will make a huge difference in the expected impacts to any given location. An error as small as 50 miles could be the difference between 70 mph winds and 170 mph winds at a location that unexpectedly finds itself in the eyewall of Irma (at its current intensity)!

Lastly, it is important to realize that intensity forecasts are even less reliable than the track forecasts discussed above. As a result, all we can say at this time is that we fully expect Irma to make landfall as a Major Hurricane (Category 3 or higher) with maximum winds of at least 115 mph. Irregular cycles in Irma's inner core, interactions with the mountains of the Greater Antilles, and interactions with warmer and colder pockets of oceanic heat could result in various fluctuations in the intensity of Irma at any one time. As always, if any of your interests anticipate impacts from Irma, please prepare for the worst, and hope for the best after you are prepared.

Almost unbelievably, Irma has continued strengthening through the day today. As of the 2pm ET advisory, Irma has 185 mph winds (160 kt), tying Irma for the second strongest wind speeds on record in the Atlantic Ocean basin. Irma's pressure has recently started to fall again, reaching at least 926 mb on the most recent measurement by the Air Force Hurricane Hunters. Irma exhibits all the stereotypical signs of an extremely dangerous Category 5 storm, including small-scall pinwheel mesovortices within its eye (see loop below).

At the moment, there seems to be little reason to expect significant changes in Irma's intensity over the next 24 hours, and Irma is expected to impact the northern Leeward Islands at this intensity. In particular, the islands of Barbuda, St. Maarten, and Anguilla are likely to be directly hit by the core of Irma early Wednesday morning, while the British Virgin Islands are likely to take a direct hit midday Wednesday. It is very likely that numerous buildings on these islands will be levelled, especially buildings that are older or less well-built. All preparations in these areas need to be rushed to completion in the coming hours.

Farther to the north and west, the Turks and Caicos and southern Bahamas are likely to be impacted next beginning midday Thursday. We'll have an additional update on today's midday model update later this afternoon.

After maintaining its intensity most of the night, the last few hours have seen Irma intensify into a 175 mph (150 kt) Category 5 storm. This makes Irma the 7th strongest Atlantic hurricane on record. Irma's winds are the strongest observed since Dean and Felix in 2007 (also 175 mph wind in each).

While the track of Irma as it approaches Florida remains of relatively high confidence, its track afterwards is much more challenging to predict. We'll dive more in depth about this later today, but the entire state of Florida needs to be on high alert until the forecasts for Sunday and onward become better resolved.