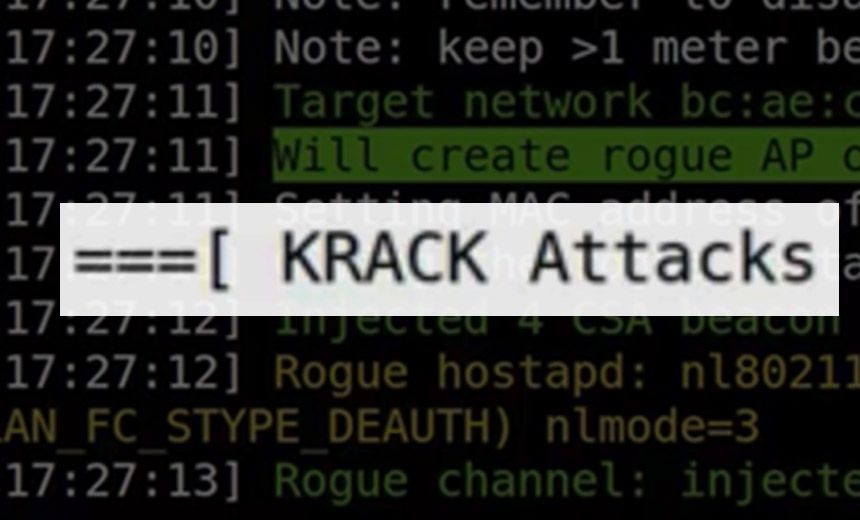 Security protocols in WiFi have a "serious weakness" that could be exploited by in-range attackers to forcibly reinstall keys on the device, route around HTTPS and encryption, and eavesdrop on all communications and potentially manipulate data or inject malware, warns security researcher Mathy Vanhoef at Belgium's KU Leuven University.

Vanhoeft has launched a website, krackattacks.com to describe the vulnerabilities in Wi-Fi Protected Access 2, or WPA2. He says the flaws "can be exploited using a so-called key reinstallation attack - or KRACK - which refers to replacing an in-use key with an attacker-created one."

Most WiFi networks that use WPA2, including personal and enterprise WPA2 networks, appear to be vulnerable. Successful exploits allow an attacker to gain man-in-the-middle access to communications and potentially inject malicious data, including malware or ransomware, Vanhoeft says.

"Attackers can use this novel attack technique to read information that was previously assumed to be safely encrypted," the researcher explains. "This can be abused to steal sensitive information such as credit card numbers, passwords, chat messages, emails, photos and so on. The attack works against all modern protected Wi-Fi networks."

More details about the flaw, including lists of vulnerable devices and vendor-specific updates, are due to be announced on Monday by US-CERT's Coordination Center.

"The weaknesses are in the WiFi standard itself, and not in individual products or implementations," Vanhoef says on the krackattacks.com site. "Therefore, any correct implementation of WPA2 is likely affected. To prevent the attack, users must update affected products as soon as security updates become available. Note that if your device supports WiFi, it is most likely affected."

Vanhoef says the flaw affects everything from Android, Linux and Windows to Apple, OpenBSD, MediaTek, and Linksys, among other systems.

Vanhoef has published his findings in a detailed research paper, Key Reinstallation Attacks: Forcing Nonce Reuse in WPA2. He's due to present the findings on Nov. 1 at the Computer and Communications Security conference in Dallas, and in December at Black Hat Europe in London.

Alan Woodward, a computer science professor at Britain's University of Surrey, says "the heart of the WPA2 flaw" involves an attack against WPA2's four-way handshake.

Vanhoef says his findings center on 10 specific flaws, each of which has been assigned a Common Vulnerabilities and Exposures identifier and help track affected products. He says each vulnerability represents a unique key reinstallation attack and that many vendors' products will be vulnerable to multiple CVEs.

CVE-2017-13081: Reinstallation of the integrity group key (IGTK) in the group key handshake;

Vanhoef offers clear advice for mitigating the flaws: Everyone should contact their vendors.

"In general though, you can try to mitigate attacks against routers and access points by disabling client functionality - which is for example used in repeater modes - and disabling 802.11r - fast roaming," he says. "For ordinary home users, your priority should be updating clients such as laptops and smartphones."

Many access points and especially less expensive, mass-produced devices sold to consumers may never get a fix for their WPA2 flaws. But Vanhoef says that client-side fixes from vendors will likely be able to block all KRACK attacks.

While this is the first attack against WPA2 that works without guessing passwords, many security researchers say they are not surprised that a serious flaw has been found in WPA2.

Like many IT executives, Hudson has been reviewing what steps need to be taken in light of the KRACK attack debuting. One piece of good news is that successful attacks require proximity. "So, you're not suddenly vulnerable to everyone on the internet," he says. "It's very weak protection, but this is important when reviewing your threat level."

Hudson says repercussions from these flaws will likely be felt for years. "It's clear to me that 'internet of things' type devices will be the hardest hit," he says. "Devices with embedded WiFi for secondary functional purposes, like TVs and baby monitors, are unlikely to get proper updates. As a protocol problem, it's possible we will be forced to choose between security and functionality, and many users will choose the latter."