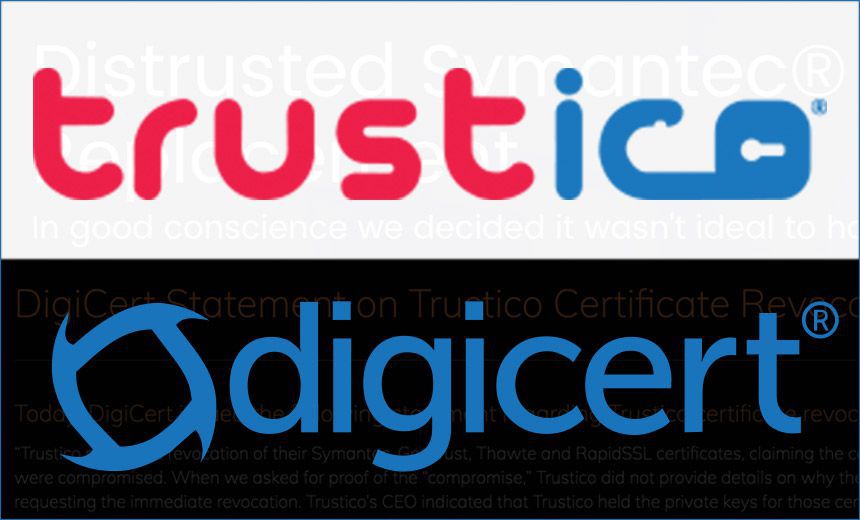 In dueling press releases, both companies accuse the other of unorthodox procedures regarding 23,000 digital certificates issued by Trustico. The private keys of those certificates have been leaked.

Digital security certificates create an encrypted connection using public key cryptography, typically indicated by "https" and a padlock appearing in the URL window of a browser. Browsing traffic can be intercepted, but if the data traffic is encrypted, it can't be read.

Trustico isn't saying how the 23,000 certificates may have been compromised. But the implication for websites using the certificates is clear: If the private key for the digital certificates has been exposed, it means an attacker could perform a man-in-the-middle attack and read the traffic.

DigiCert is in the process of revoking the certificates and has terminated its relationship with Trustico. For Trustico, the situation doesn't look good, contends Troy Hunt, an Australian security expert.

"To be honest, a large part of the problem here is that Trustico is not providing the industry ... with enough information to establish what did actually happen," Hunt says.

To get into the conflict requires a bit of history, and as with anything involving digital certificate vendors, it's a tortured one.

In early February, Trustico sent notice to DigiCert to revoke all of the security certificates it had ever issued, which numbers around 50,000. But the email went to the wrong address. Eventually, though, DigiCert was alerted.

Trustico needed DigiCert's cooperation because the company now holds Symantec's root certificates, which are needed for revocation. The certificates in question were issued under various brands that came from Symantec's acquisitions over the years, including Thawte, GeoTrust and RapidSSL.

By virtue of its having emailed the private keys in an unprotected form, DigiCert said it was left with no option but to treat the certificates as having been compromised. DigiCert then notified the holders of those certificates, which is required under the CA/Browser Forum Baseline Requirements.

The emailing of the private keys was unorthodox, but it didn't matter: Around 20,000 of the keys have so far been confirmed compromised via Certificate Transparency logs. The keys are in use, which makes this a serious security issue.

But after DigiCert notified holders of the affected certificates, Trustico accused DigiCert of hijacking the notification process. Trustico further disputes that the keys were compromised.

Given the confusion over whether the keys had been compromised, DigiCert says it decided to revoke the keys on the basis that the information had been sent via email.

"As a CA [certificate authority], we had no choice but to follow baseline requirements," DigiCert writes.

It's unclear how the private keys were compromised.

Trustico has indicated that the blame for the key situation lies with the long-running trust issues around Symantec. Lucas writes that Trustico felt that the certificates it sold under the Symantec brand name - generated by Symantec's infrastructure - "were at risk."

"We were also a victim whereby Symantec mis-issued SSL certificates owned by us," he writes. "Subsequently, we were asked to keep the matter quiet under a confidentiality notice."

But DigiCert says it rejects Trustico's intimation that its request to revoke the 23,000 certificates is related to Google's eventual distrust of all Symantec certificates.

"That is incorrect," DigiCert says in its press release. "We want to make it clear that the certificates needed to be revoked because Trustico sent us the private keys; this has nothing to do with future potential updates."

So what should administrators do? It's probably a good idea to replace any Trustico digital certificates as quickly as possible. Although efforts are underway to see if the other 27,000 or so certificates are also compromised, it's probably best to stay on the safe side.