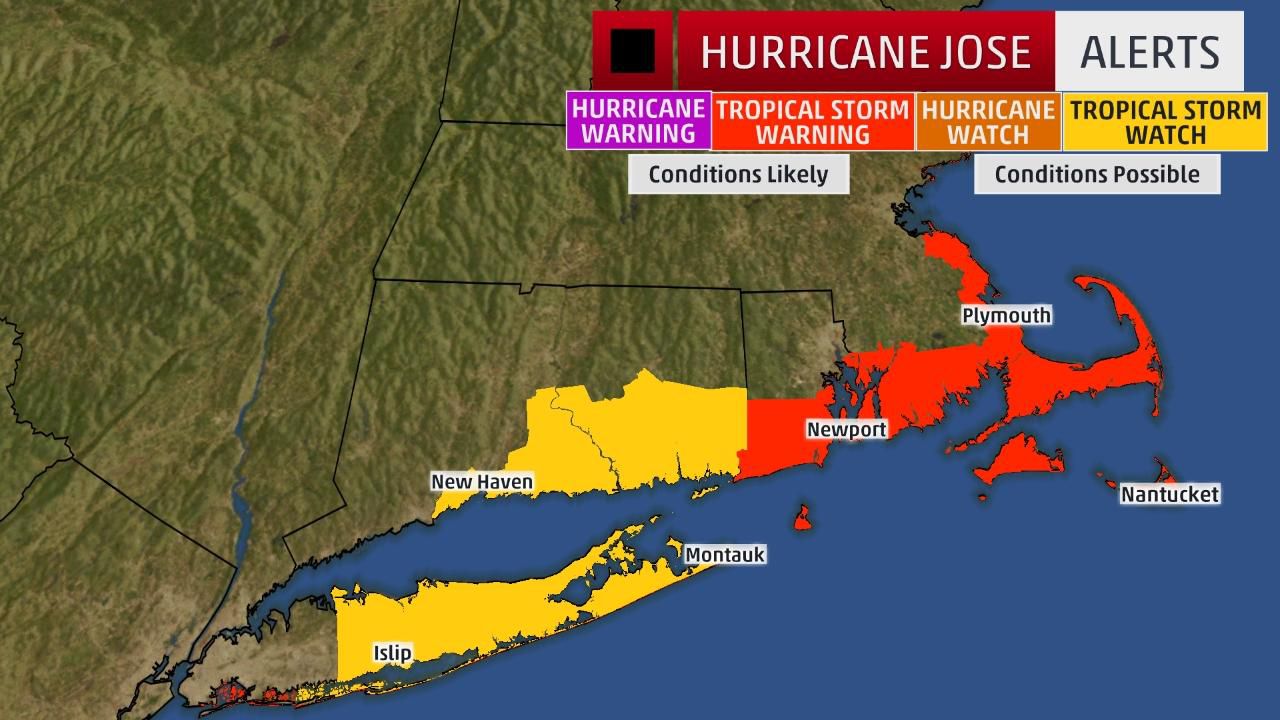 Hurricane Jose is expected to remain well off the East Coast of the United States, but will still produce a combination of coastal flooding, high surf, tropical-storm-force winds and heavy rainfall, particularly in far southeastern New England.

Tropical storm warnings have been issued for parts of coastal southeast New England, from Watch Hill, Rhode Island, to Hull, Massachusetts, including Block Island, Martha's Vineyard and Nantucket. This means tropical-storm-force winds are expected within 36 hours.

A tropical storm watch remains in effect along the coast of Long Island from Fire Island Inlet to Port Jefferson, as well as from New Haven, Connecticut, to Watch Hill, Rhode Island. A watch means tropical storm conditions are possible within 48 hours.

Jose's center is currently located more than 300 miles south of Nantucket, Massachusetts, and is moving north at near 10 mph.

The combination of wind shear, progressively lower ocean-heat content as Jose departs the Gulf Stream and drier air should weaken it to a tropical storm, then a non-tropical low-pressure system later this week.

At this time, the majority of forecast guidance still shows Jose's center spinning north, then northeast well off the U.S. East Coast.

However, Jose will track close enough to the Northeast seaboard for some impacts this week. In some ways, Jose's impacts will resemble what a nor'easter would produce in southeast New England, but without the snow.

Here's a look at the timing and what to expect from Jose.

Tuesday-Tuesday night: Areas from the Delmarva Peninsula to Long Island and southern New England may be affected by gusty winds and bands of rain.

Some residual gusty winds are possible Thursday on Nantucket Island, Martha's Vineyard and Cape Cod as Jose continues to gradually spin down.

Wind: Scattered power outages and tree damage cannot be ruled out along the immediate coast of far southeast New England on Wednesday.Rainfall: Jose is expected to produce total rainfall amounts of 1 to 3 inches through Wednesday over eastern Long Island, southeast Connecticut, southern Rhode Island and southeast Massachusetts. Locally higher rainfall totals of 3 to 5 inches are possible in Cape Cod, Martha's Vineyard and Nantucket.High surf, rip currents: Large swells from Jose will continue to affect the Eastern Seaboard. This will contribute to life-threatening rip currents in some locations.Coastal flooding: Minor to moderate coastal flooding is possible at times of high tide through Tuesday along the mid-Atlantic coast. Coastal flooding is likely through much of this week along southeast New England's shorelines, with the potential for significant beach erosion, given the high astronomical tides and multiple tide cycles with coastal flooding.